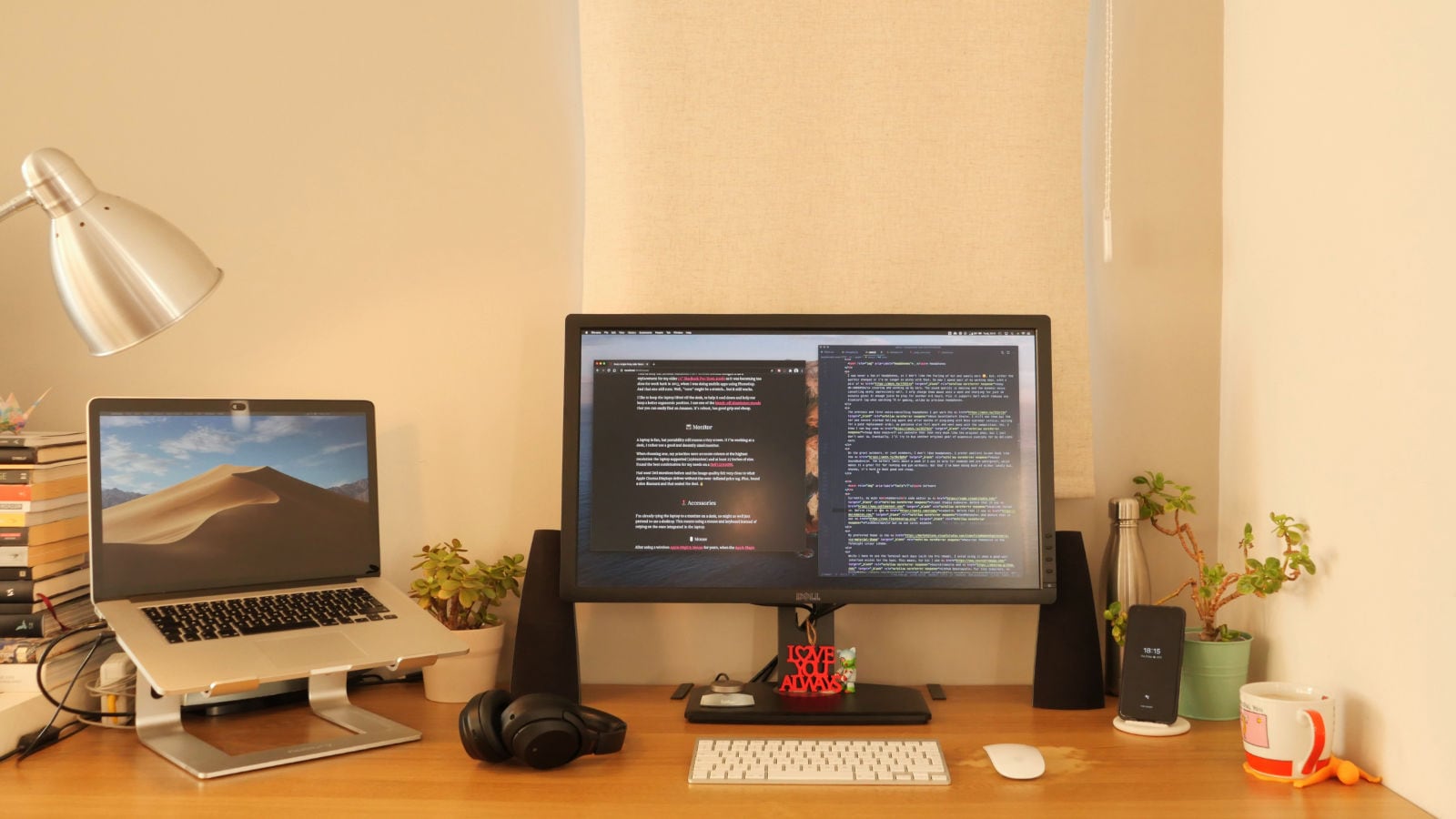 * Well, actually, my real desk is never this tidy nor does it include plants. This is on the internet. It’s all fake. All just for show. Sorry! My real desk usually features toys from my kid, old magazines, some books, scrapes of paper with random notes, wallet, watch, months-worth of bank statements, plenty of dust and, sometimes, even just enough room to work.

Currently writing this on my 15" MacBook Pro (from 2013!), that I use for way too many hours every day for work and play. Seven years later, I still don’t feel any need for an upgrade. Either this is a great machine or my work might not be challenging enough. 🤔

This is only the second MacBook Pro I’ve ever owned. Bought it as a replacement for my older 15" MacBook Pro (from 2008) as it was becoming too slow for work back in 2013, when I was doing mobile apps using PhoneGap. And that one still runs. Well, "runs" might be a stretch… but it still works.

I like to keep the laptop lifted off the desk, to help it cool down and help me keep a better ergonomic position. I use one of the knock-off aluminium stands that you can easily find on Amazon. It’s robust, has good grip and cheap.

A laptop is fun, but portability still means a tiny screen. If I’m working at a desk, I rather use a good and decently sized monitor.

When choosing one, my priorities were accurate colours at the highest resolution the laptop supported (2560x1600) and at least 27 inches of size. Found the best combination for my needs on a Dell U2713HM.

Had used Dell monitors before and the image quality felt very close to what Apple Cinema Displays deliver without the over-inflated price tag. Plus, found a nice discount and that sealed the deal. 💰

I’m already tying the laptop to a monitor on a desk, so might as well just pretend to use a desktop. This means using a mouse and keyboard instead of relying on the ones integrated in the laptop.

After using a wireless Apple Mighty Mouse for years, when the Apple Magic Mouse was announced, it was an easy sell for the fanboy in me. It’s still the same one I use today with the same set of AmazonBasics rechargable batteries. I hope it doesn’t die anytime soon, because the USB changing solution that Apple found for Magic Mouse 2 is just ridiculous. 🤦‍♂️

I’ve also had an Apple Magic Trackpad for about a year, but gave up and sold it. I’m so familiar with using a mouse that I couldn’t adapt to a trackpad.

The third generation Apple Wireless Keyboard is still my favourite one. It matches the same exact layout as my laptop and alternates the same rechargable batteries with the Magic Mouse. Before this keyboard, I used an second generation Apple Keyboard with a numeric keypad. Still have it, stored somewhere out of sight. I’ve been tempted by custom mechanical keyboards but haven’t made the jump yet. Too many options, too many decisions. Might happen in a near future.

Yes, speakers. When my laptop is on my desk, it’s connected to an Edifier Prisma 2.1 speakers system in cobalt blue. These sound great and with the subwoofer, it can deliver a heavy bass when required. Bought it when I moved to London and lived in a flatshare, which made it a great fit for watching movies on the laptop. This was before I gave in and converted to noise cancelling headphones.

I was never a fan of headphones, as I don’t like the feeling of hot and sweaty ears 😑, but… either the quality changed or I’m no longer as picky with that. So now I spend most of my working days, with a pair of Sony WH-1000XM3 covering and warming up my ears. The sound quality is amazing and the dynamic noise cancelling works impressively well. I only charge them about once a week and charging for just 10 minutes gives it enough juice to play for another 4-5 hours. Plus it supports AptX which reduces any Bluetooth lag when watching TV or gaming, unlike my previous headphones.

The previous and first noise-cancelling headphones I got were the Bose QuietComfort 35. I still own them but the ear pad covers started falling apart and after months of ping-pong with Bose customer service, waiting for a paid replacement order, my patience also fell apart and went away with the competition. Yes, I know I can buy some cheap Bose knock-off ear pads that look very much like the original ones, but I just don’t want to. Eventually, I’ll try to buy another original pair of expensive cushions for my delicate ears.

On the great outdoors, or just outdoors, I don’t like headphones. I prefer smallers in-ear buds like the Anker SoundBuds. The battery lasts about a week if I use it only for commute and are waterproof, which makes it a great fit for running and gym workouts. Not that I’ve been doing much of either lately but, anyway, it’s hard to beat good and cheap.

My preferred theme is the Material Theme in the Palenight colour scheme.

While I have to use the Terminal most days (with the Pro theme), I avoid using it when a good user interface exists for the task. This means, for Git I use Sourcetree and GitHub Desktop. For file transfers, Transmit. For database management, Sequel Pro (Beta) and TablePlus. For image optimisation, ImageAlpha and ImageOptim. For WebP conversion, WebPonize. For SVG optimisation, SVGOMG.

For note taking, my long time favourite has been Evernote, but Notion has been growing on me. Keep is my go to for quick ideas, bullet points or to do lists on mobile.

For UI design, I’ve tried Figma a few times, but keep coming back to Sketch with Abstract for version control. It gives me a extra safety net for being a desktop app. Yes, I develop apps for web browsers and still can’t trust it enough for work. 🤷‍♂️

For graphic design, Affinity Designer is the best app and together with its companion Affinity Photo for photo editing, makes Adobe equivalent apps look like a sad excuse for professional tools. Don’t even get me started with XD.

Good unique passwords are hard to generate and even harder to remember. So, many moons ago, I tried 1Password and never thought about that again.

When it comes to publishing things online, DigitalOcean is my favourite hosting option for robust websites that need a backend or database to connect to. Got plenty of websites hosted there on just a few servers. It’s as good as equivalent tools in AWS, but without needing an engineer degree to use it. The UI is much simpler and easier to use and the documentation a joy to read. Yes, that good. Also it doesn’t sting every time you get a massive traffic surge from Hacker News, Product Hunt or Reddit.

For simple static sites, and even some more app-like prototypes started relying on Netlify. The clean UI paired with the simplicity of continuous deployment directly from code repositories, makes it a joy to use and abuse the generous free tier.

For domain registration, Google Domains is my tool. The UI is similar to other great Google products, so it’s very clean and easy to use.

Since I run all business through my company, I also need an accountant to keep things legally tidy. For me the best solution was Crunch. They provide an easy-to-use accountancy web app and direct access to expert accountants whenever I need.

Finally, because "time is money" and most of what I do takes some time to deliver, I track my time using Toggl (Track). It’s simple, pretty and not expensive. The free plan goes a long way. It’s also great reminding me how much money I’m wasting by not charging clients for every single task. That being said, I’m my own worst client and this little page is getting expensive to write.

The actual desk is just an IKEA Linnmon oak table top with a couple of black Adils legs on one side and a small black shelving unit like this Kallax on the other. It’s not really this unit, but cannot find mine on their website.

I’ve had this desk and chair combination for almost 10 years, and while it stood well the test of time, it’s clearly visible that both table top and chair have had some use. The table top is starting to bend in the middle and the seat fabric is starting to rip apart. I’m thinking of upgrading the desk to a Bekant sit/stand desk but I haven’t decided yet on the chair to go with yet. I love seating on Herman Miller Aeron chair, the gold standard in office seating, but ouch…😬they’re on pricey side. Again… decisions, decisions.

While owning an iPhone 4, I’ve had a taster of the Android side with a used Samsung Galaxy 3 bought off eBay, but didn’t like any of the crap software added on top of Android OS. So when Google launched the Google Nexus 4, I jumped ship. Loved it so much, that bought the next version, the Nexus 5. Even got a Nexus 10 tablet just for playing games and watching videos.

I was happy with the setup for 3 years (!), until my dear wife organised the Google Pixel UK launch event and I played around with the phone. Was mind blown with how much better the camera was compared to everything else in the market. And… parted ways with cash again.

Later came a new iteration of the same compact model with an even greater camera. History repeated and I’m still the happy owner of a Pixel 3.

After moving to London, felt the need to start recording life through photography again. Felt in love with the compact micro four thirds / mirrorless format and got a Panasonic Lumix GX1. It’s portability and growing range of lens made it an attractive alternative to traditional DSLR cameras. Nowadays, I use a more recent iteration of the same format, a Panasonic Lumix GX9.

Over the years, I started adding options to my stock of lens, so now I own, use and recommend: Leica 25mm F1.4 (usually, my default choice and, definetely, my most used lens ever. Bokeh! 🤩), Lumix 45-200mm (for nature shots), Lumix 20mm F1.7 (great for meals with friends) and Leica 12-60mm (great for video and slowly becoming my default choice).

To carry around the camera, lenses, variable ND filters, batteries and memory cards I use this Lumix shoulder bag. It was part of the deal when I bought the GX9 and it’s been very useful. It’s light, sturdy with good padding and a rain cover.

For stability, I use one of these generic tripod / monopod from Amazon. It’s robust, good quality and easy to carry around for shootings, plus it includes a camouflaged bag. What else could you need? 😅 I also have a Gorillapod for all sorts of weird shots and my non-existent vlogging career.

For indoor and product shootings, I use this softbox lighting kit that offer usually more than enough light for professional portraits or YouTube recordings. For small products, use this lighting kit with a cube light tent. Good enough to get high qualify shots to help sell things on eBay.

Using all these electronics comes at the expense of energy consumption. To lower our carbon footprint, at home, we use only 100% renewable electricity supplied by Bulb.

All this stuff is sorted in no particular order.

Some of the product links above are affiliated links.
This makes no difference to you but, if you buy the product, I’ll get a tiny percentage of the sale.